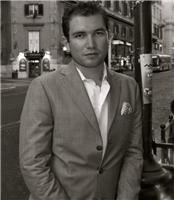 Christian Pollock died on Friday, March 12, 2021 at the same location where he was born on Sunday, October 25, 1987 – the Community Hospital of the Monterey Peninsula, Carmel, California. He died on the last day of his 4th month hospitalized, fighting for his life as a result of gallstones, sepsis and pancreatitis., which he had almost conquered through sure will and love of life and family. He was attending law classes from his ICU bed and studying between operations and many procedures. We now know he tragically suffered for 2 months before seeking medical attention, waiting for his medical insurance to begin.

Christian attended Carmel schools until he entered York School in the 8th grade. He enjoyed the Socratic learning environment, his peers and being a member of the golf team during five years as a ""Yorkie"", graduating with the class of 2006. Concurrently, he earned his Eagle Scout rank with troop 43 and gathered life-long friends during those experiences. He attended a month of Italian language school in the coastal town of Otranto, Apulia, Italy his 15th summer with his mother and remained the rest of the summer alone with his cousins in Tricarico, Basilicata, Italy. Christian embraced everything Italian at an early age, traveled to Italy frequently and kept in touch with his Italian cousins almost daily.

He attended UNLV to study hospitality, entering as a sophomore (thank you York) graduating in 2009 with a BA in Hospitality Management. His sophomore summer he secured an internship on the shores of Lake Geneva, Switzerland and loved working the Montreux Jazz Festival and traveling, gathering more life-long friends. His junior summer he served a 6 -week internship back on the Monterey Peninsula with the Hyatt Del Monte, rotating departments for a broad experience, hoping to select his specialization and gathering more life-long friends. He chose to focus on food and beverage services and began a working internship his senior year at Picasso restaurant in the Bellagio, Las Vegas. Immediately after graduation, he traveled with a group of 16 other world-wide F & B graduates who were awarded the Banfi Fellowship (sole importers of many Italian goods to the U.S.). They traveled Italy north to south experiencing the factories, vineyards, orchards, and facilities that produced Italian fare for the industry, introducing these future Food & Beverage directors to the finer facets of Italian products. He extended that trip to France and Ireland with life-long friends he made while at UNLV. His career in Las Vegas is aptly captured by this quote by Gilles Jay Kolakowski, mentor his senior year at UNLV: "I met Christian at the Bellagio, on a mentor/ mentee program as he was at UNLV in hospitality management. Our first lunch together, I was blown away by his maturity, and his will to succeed. I had the honor to spend 9 months with him, working closely, developing more than a friendship, and a brotherhood, a relationship deep and close to my heart. I had to get him a watch because we have to wear them in the business. Witnessing his amazing career, starting as manager at Craft steakhouse then AGM (at Prime steakhouse), GM at Jean Georges steakhouse, and then his taking the GM job at Picasso (where it all started) brought me pride, admiration and so much joy. We celebrated his 21st birthday together, a party I still remember. I told him he was destined to a future where the sky is the limit. I was the mentor in the program, he was better than me. He is the last GM I hired in my career, for Scott Conant's "Masso" at Red Rocks in Las Vegas. He was the best in the business, with knowledge, a natural outstanding hospitality skill, a humility, an integrity, a sense of friendship that has - bar none - never seen again. OUR last text was on his birthday, he would not miss mine, I wouldn't miss his. He told me about law school. Of course, "blow me away once more buddy", I know you will be the best at it. The world lost one of a kind, not duplicable, an extraordinary human being, out of the ordinary human being, and I am so lucky I had him in my life. My thoughts to all his loving family, and all the people he touched by his kindness, his positivity, his intelligence. "Thank you Christian, for being forever a part of my life that I will never forget". One of the very few I happily said "I love you man." Rest in Peace my dear friend".

From Rear Admiral Bob and Barbara Day, U.S. Coast Guard (ret): "In the fall of 2003, I had the honor of speaking at Christian's Eagle Scout Court of Honor, an achievement that only eight percent of all Boy Scouts attain. Throughout the well-attended ceremony, details of Christian's character, dedication to scouting, contribution, and leadership were praised by Scoutmasters and more importantly the other scouts. Christian's personal comments during the ceremony focused squarely on his Scout leaders, his troop, and his family; never a comment about himself but only about those that had contributed to his journey. Years later, my wife and I had an almost identical experience when we had the chance to dine at the Jean Georges Steakhouse in the Aria Hotel in Las Vegas where Christian had ascended to the manager position. From the moment we arrived, the staff constantly told us how much they enjoyed working for Christian and admired his leadership and dedication to making the restaurant one of the finest in Las Vegas. We had an amazing evening and when we told Christian how proud we were of his achievement; he simply replied it was because of the exceptional team that he had and the support he received along the way. True Christian! Loyal, helpful, friendly, courteous, and kind."

Christian returned to Carmel 18 months ago to family and decompress. The focus of his attention was grandmother Carolina Bayne(nonagenarian), the last remaining full-blooded family member in California. He was grateful to have 5 quality months with her before she passed in February 2020. He was working for Sandra and Richard Pepe as their Director of Operations for Vesuvio and Little Napoli restaurants in Carmel before starting studies at the Monterey College of Law, looking toward practicing Labor Law and Mediation as a result of his interactions with unions while in Las Vegas. His love of family, cooking, entertaining with family and friends, singing along with Sinatra tunes, dancing, impersonations, eloquence, diplomacy, kindness, impeccable style and decorum along with his wit, gentle generous heart and soul remain with all who knew him. Those who were fortunate to be touched by Christian's presence, carry his bright smile of internal warmth that lit up our rooms and our hearts, making all of us feel truly special to him. He was a huge fan of the Rat Pack, as best sung by Frank Sinatra "" he filled our hearts with song and we shall sing forevermore".

Devastated and grieving are parents Ambrose and Michele Pollock (Carmel), brother Joshua Pollock (Marcette) and their children Sophia, Margaret, Wyatt and Zephyr of Reno, NV also survived by grandmother Alyce Pollock (Santa Cruz), 3 aunts and 2 uncles, numerous great aunts and uncles, hundreds of cousins both in the United States and Italy and his mini Dachshund puppy, Francis Albert, aka "Frankie" Pollock, a source of endless joy. If you would like to honor Christian, please consider a gift to the endowed scholarship in his name, awarded annually to a need-based student at the following institution as a 501 c3 non-profit where he was attending law school:

A Celebration of Christian's life will be held on his 34th birthday, Monday, October 25th in Carmel. Jehan Brunton, fellow Yorkie will have details, [email protected]">. His ashes will be spread by his family on Carmel Bay and from the hills in Tricarico, Italy down and into the Tyrrhenian Sea. You may leave messages for the family at www.healeymortuary.com. The family thanks friends, community and extended family for their outpouring of love and support as they adjust to life on this planet without Christian.

To plant trees in memory, please visit our Sympathy Store.
Published by Las Vegas Review-Journal on Mar. 28, 2021.
MEMORIAL EVENTS
No memorial events are currently scheduled.
To offer your sympathy during this difficult time, you can now have memorial trees planted in a National Forest in memory of your loved one.
GUEST BOOK
2 Entries
This was one of the saddest days when I heard the news. I worked with Christian for many years and was always happy the nights I got to work beside him. We talked often of old black and white movies, laughed at the happenings of the night and just just had a good time no matter how stressful the night would be. Christian had a way to always make you feel like the most special person in the room. In his presence you were always treated like royalty. Our birthdays were within a week of each other and I would trade we were kindred spirits because we were both scorpios, wherein he would just give me that Christian smile shake his head slightly with a slight roll of eye and continue on with what he was busy with. Christian was a handsome man with a beautiful heart and a magnetic soul. You don't met people like that often or ever in a lifetime. I am honored to have met worked with and friended Christian. May his soul rest in peace, he will be so missed.
Vickie Maston-Airada
March 30, 2021
I am beyond shocked and saddened. An amazing, wonderful, talented young man. He treated me with the utmost respect. Will not forget him. So sorry for your loss.
Mia Alfonso
March 29, 2021