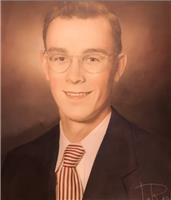 BORN
1935
DIED
2021
September 11, 1935 --- February 25, 2021
Mert Rumford lived his life with love and kindness.
Brilliant and humble, he led by example
to make a difference in our world –
first working for NASA to get man to the moon,
then for the Army to help win the Cold War –
but the biggest impact he made was in the
lives of his family and friends.
Born in Detroit into a prestigious family in
the automotive industry, Mert was ingrained
early with a fascination for cars and all things
mechanical. At Purdue, his passion expanded
to aerospace and flying, earning his pilot's
license. After graduation, his interests shifted
to missiles, rockets, and space. In his free
time, Mert enjoyed relaxing on the water –
water-skiing with his boat on the lake, sailing
a catamaran in the Gulf, or deep-sea fishing
off the Keys. At the dawn of the personal
computer age, Mert's talents transformed
to using computers, software programming,
and all things electrical. Mert had an innate
understanding in how complex systems worked
– and he used his remarkable insight to not only
improve systems but also, more importantly,
share his great perception with others. He could
explain complicated issues with easy words.
He was a down-to-earth member of Mensa –
always a patient teacher – always there to help.
With a beaming smile, Mert loved to retell
a humorous story or share a life lesson, often
revolving around the places he lived – his
childhood in Detroit, MI; his formative years
in Evansville, IN; his university life in West
Lafayette, IN; starting his family in Huntsville,
AL; raising his family in St. Louis, MO; and
then his retirement to Las Vegas, NV. Mert
would light up with any good dog story (from
his childhood dog, Heine, to his last dog Sam)
or a saga from his college days (his Plymouth
convertible packed with Kappa Delta Rho
fraternity brothers celebrating a Purdue win).
He also had his share of amusing accounts from
his stint in the U.S. Army and years working as
a government employee for NASA and the
Department of Defense.

Mert was a world-class expert in aerospace
reliability. In the early 1960's at NASA, he
developed test procedures to measure shock
and vibration of rocket launch systems and
performed failure mode, effects, and criticality
analysis on the Apollo program. His engineering
work advanced critical technical standards still
used today by NASA and our military. In the
1970's, Mert worked for the Army Troop Support
Command and the Army Aviation Command
as the lead systems engineer for a number
of classified electronic warfare systems –
including capabilities that were later used
in the critical first strike in Operation Desert
Storm. After leaving federal employment in
the early 1980's, Mert was a highly sought after design consultant, working on the design
team for the Advanced Tactical Fighter (which
ultimately evolved into the F-22), designing life science experiments for space environments
(which flew on the Space Shuttle), and testing
numerous helicopter projects. In retirement,
Mert was active in serving his community
of Sun City Summerlin (from Architectural
Review Boards to Security Patrol) and
involved in numerous political, civic, and social
organizations in Clark County, including being
recognized by one organization with their '2003
Man of the Year award for his tremendous
contributions. Most significant, the Governor
awarded Mert a commendation in 2003 for his
continual dedication of his time and talent to
the citizens of Nevada.

The most extraordinary aspect of Mert's life
journey began on a summer day, at age 17, when
he first caught glance of and met Aretta "Betty"
Betz, age 16, working as a carhop at the Humpty
Dumpty Drive-In in Evansville. From that day
forward, Mert and Betty were inseparable. Their
relationship was forged and strengthened by
their utmost respect, commitment, and deep
love for each other. Mert would say that the
smartest thing he did was marry Betty. Married
for over 63 years, their love and devotion went
beyond husband and wife – they were partners;
they were collaborators; they were each other's
" Best Buddy". Their hearts desire for a large
family began with the births of Marlene Louise
in 1958, Gregory Allan in 1960, Raymond Curtis
in 1962 and included caring for infants in foster
care until their youngest child George Joseph
was born in 1968. Along the way, Mert and Betty
experienced significant tragedies, suffering
the loss of Raymond in infancy and their only
daughter Marlene to a brain aneurism at the
age of 18.

At age 44, Mert endured a massive heart
attack that required quintuple bypass surgery
and doctors prognosed he would only live a
few more years. Undeterred, Mert and Betty
embarked on a campaign of a low-fat diet
and regular exercise that enabled Mert to live
another 41 years.

Mert was a good and faithful servant
who has now entered into glory to be with his
Lord and Savior Jesus Christ. A private family
service is planned in St. Louis, MO. In lieu of
fl owers, please consider a memorial donation
made "In Memory of Merton Rumford"
to The Leukemia & Lymphoma Society.
https://donate.lls.org/lls/donate.
To plant trees in memory, please visit our Sympathy Store.
Published by Las Vegas Review-Journal on Mar. 28, 2021.
MEMORIAL EVENTS
No memorial events are currently scheduled.
To offer your sympathy during this difficult time, you can now have memorial trees planted in a National Forest in memory of your loved one.
MAKE A DONATION
Please consider a donation as requested by the family.
GUEST BOOK
3 Entries
Mert was my best friend at Purdue, and Best Man at my wedding. We only got together occasionally as time passed, but those times were always something my wife Ellie and I looked forward to. He and Betty were fun to be around and reminisce with. RIP Mert.
Jim Vail
March 29, 2021
Those we love do not go away, they walk beside us every day. We will miss Mert at SMRW.
Kay Groff
March 29, 2021
Meet, was one of the nicest men I have ever known. He Helped the party,Just like Beaty did. He will greatly be missed.
Barbara Altman
March 28, 2021