BORN
1946
DIED
2020
STEVEN G SCHORR April 24, 1946 November 12, 2020 Steven G. Schorr, a longtime Las Vegan, former broadcast newsman, community champion and devoted husband and father, died of natural causes on November 12, 2020 in Las Vegas. Over the past 40 years, Steve was widely recognized by local, state and national organizations for his tireless and lengthy involvement with civic organizations, youth groups and public service agencies. He helped raise millions of dollars for various charitable organizations in Southern Nevada and served on the board of directors for dozens of local nonprofit and civic organizations. Steve was born on April 24, 1946 in Newark, New Jersey. He was a former news director at WDAS in Philadelphia, the No. 1 R&B station in the country at the time and was a well-known figure to television audiences in Philadelphia and Richmond, Va. With his distinctive baritone voice, he was the broadcast voice of Ford Motor Company and Johnson & Johnson. Steve, Holly and their two young sons David and Darrin headed West to Las Vegas in the late '70s. He started as a news reporter at Channel 13 and went on to work as an anchor and news director at Channel 3 and later as an anchor and the first investigative reporter at Channel 8. He later returned to Channel 13 as an anchor. A generation of Las Vegans went to bed with Steve on their televisions. Over his career, he was recognized with numerous national, regional and state awards for journalism including two Emmy Awards for news anchoring, two National Freedom Foundation Awards, a Headliner Award and an Armstrong Award for Broadcasting. He was inducted into the inaugural class of the Hall of Fame by the Nevada Broadcasters Association. When he signed off the news, he signed on with the former Prime Cable, which later became Cox Communications, serving as Vice President of Public and Government Affairs for 25 years. Most recently, Steve was executive vice president for government affairs at Fierro Communications in Las Vegas. He was the founder, president and CEO of Vegas Life TV and creator, producer, anchor and host of "Under The Vegas Sun," a national and international television program. He also produced and anchored "The Whidbey Buzz," a twice-weekly news program throughout the Northwest. Steve was an adjunct professor in communications at UNLV for 13 years and was recognized with numerous awards and honors over four decades in Southern Nevada, including the American Heart Association's Heart of Gold Award, the Glenn Smith Humanitarian Award from Opportunity Village and Points of Light Awards from two Nevada Governors. Steve also received Lifetime Achievement Awards from the U.S. Justice Department and the National Center for Missing and Exploited Children as a result of his efforts to protect children from abuse and abduction. Nevada Child Seekers named him Man of the Year for his lifetime efforts on behalf of all youth. He and Holly were animal lovers and raised Doberman Pinschers for 30 years. He was an AKC certified judge and presided over many national and international dog shows, helped rescue groups, hosted charity events and emceed dozens more. He would be the first to share that his proudest accomplishments were his family as well as all the students past and present at his namesake Steve Schorr Elementary School in Las Vegas. Steve is survived by his wife of 52 years Holly, and son Darrin, a Captain with the Clark County Fire Department, sister Betty Morrison, daughter-in-law Bridgette and grandchildren Aliza, Caitlyn and Ethan, as well as several young adults who consider Steve their surrogate father. Steve was preceded in death by parents Bernard and Dotty, as well as his oldest son David, who is now reunited with the father who loved him so much. For those who would like to give back to the community Steve so loved, his family suggests donations to Steve Schorr Elementary School PTA for the Steve Schorr Memorial Fund at www.schorres.com and/or The Animal Foundation www.animalfoundation.com. Details of a well-deserved Celebration of Life are pending.

To plant trees in memory, please visit our Sympathy Store.
Published by Legacy Remembers on Nov. 18, 2020.
MEMORIAL EVENTS
No memorial events are currently scheduled.
To offer your sympathy during this difficult time, you can now have memorial trees planted in a National Forest in memory of your loved one.
GUEST BOOK
9 Entries 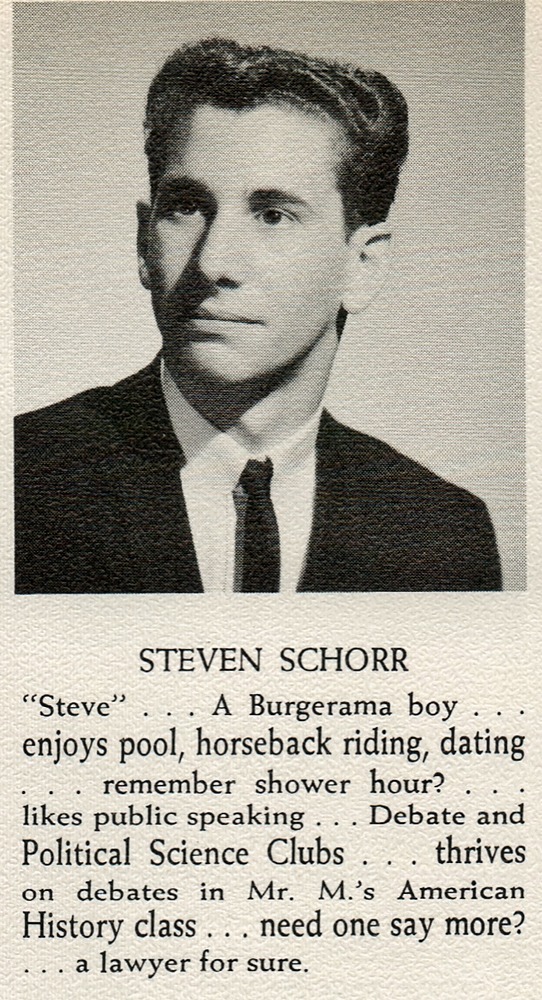 LARRY RUVO
November 20, 2020
Holly and family. I'm so sorry to hear of Steve's passing. My deepest sympathies. Judy Parker, Running Bear Akitas
Judy Gresham Parker
Friend
November 19, 2020
May your hearts soon be filled with wonderful memories of joyful times together as you celebrate a life well lived.
Conny Singer (formerly Schofield)
November 19, 2020
Steve was a class act. Always professional in his demeanor and had a genuine caring attitude to those charities that he supported and endorsed. He was a delight to be around. May God welcome him into his loving arms as we send our deepest condolences to his family. The London's, Jack and Sherry
jack London
Friend
November 18, 2020
Steve always looked at the good things in life. He was a delight. He was so proud of his son as well. He played it forward for this community.
Chris Giunchigliani
Chris Giunchigliani
Friend
November 18, 2020
Steve helped me immensely several years ago. I was a candidate for Constable, Las Vegas Township.
His kindness, superior tailoring, solid character and complete regard for everyone’s final product was only perceived as emanating from a pure and service to others first mentality.
I am forever in debt to have met Steve and will always hold his help for me and so many others close to my own idealistic heart.
May he be the epitome he was to all who read about his life for decades to come.
With deep felt gratitude,
Michael L. Yepko
Michael Yepko
Acquaintance
November 18, 2020
Our prayers go out to the Schoor family !!
Daron & Judy Gregory
Electric Chair Salon
Daron Gregory
Friend
November 18, 2020
I had the distinct pleasure to know Steve for many years. While I worked on the administrative team at the Clark County Fire Department, Steve proved to be more than just a friend. He was always involved in our community and available to assist our team anytime the need arose. Steve was a very kind, compassionate and understanding person always willing to help others. In addition, Steve was the proud dad of his son Darrin who, like his dad, puts his community first as a Fire Captain with the Clark County Fire Department. When I retired, Steve willingly embraced being the MC at my retirement party. As usual, he was witty, fun and the commensurate professional which made it an event for all in attendance to remember. One of the last time I saw Steve he was having dinner with his entire family, which is just where he wanted to be. I will remember my friend as the fun loving person he was. My thoughts and prayers are with the entire Schorr clan.
Jerry Keating
Friend
November 17, 2020