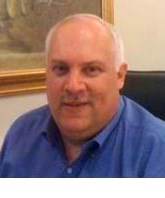 BORN
1962
DIED
January 27, 2021
Thomas David "Cohen" Simko, 58, beloved son, brother, uncle and friend died recently in Las Vegas. The son of Robert and Irene Simko, Tom was born in New Brunswick, NJ. He grew up in Hershey, PA but was a long-time resident of Henderson, NV.

After graduating from Penn State University, Tom moved to Columbus, OH and began his career as a sales professional for the hospitality industry. It was there he also met his lifelong best friends, Mike and Heidi and joined his beloved baseball Strat-O-Matic league.

In the late '90s, Tom moved to Las Vegas to further his career. Beyond work, Tom enjoyed vacationing in Southern CA, attending baseball Spring Training in Phoenix, thoroughbred handicapping, and hanging out with friends. He loved sports, baseball in particular, and joked that he "bled Dodger blue" for his favorite team, the LA Dodgers.

Tom ("Cohen" to his friends) was a highly gifted writer and published poet. He was witty, intelligent, loyal, stubborn, proud and loving. While he never married or had any children of his own, Tom was a fun uncle and enjoyed spending time with his nephews and nieces.

Although he came from the east coast, it was in the Las Vegas area that Tom truly found his home. In addition to his parents, Tom is survived by three siblings, Susan Sidler, Robert Simko, Jr. and Nancy Simko. He also is survived by Mike Doran and Heidi Gorsuch of Henderson, NV, close friends for 33 wonderful years.

Tom struggled with many chronic health issues, which ultimately cost him his life. He will be terribly missed by his family and friends. Those who wish to remember Tom are asked to make a donation to CHEMOWARRIOR: the eli sidler foundation (www.chemowarrior.org), which raises money for pediatric cancer research in memory of his nephew.

Services will be private.
To plant trees in memory, please visit our Sympathy Store.
Published by Las Vegas Review-Journal on Feb. 21, 2021.
MEMORIAL EVENTS
No memorial events are currently scheduled.
To offer your sympathy during this difficult time, you can now have memorial trees planted in a National Forest in memory of your loved one.
GUEST BOOK
0 Entries
Be the first to post a memory or condolences.